Legend has it that Lord Siva taught this art form to his son Lord Murugan and Lord
Murugan taught this art to the sage Agastya, foremost of the Siddhar's, during the times of Sangam Literature. He
transferred the knowledge of this art to other Siddhar's and he also wrote treatises on this art
in Tamil. The presence of shrines to Agathiar in Courtallam suggests that he researched the art
there

is an Indian martial art from the southern state of ancient Kerala. One of the oldest fighting systems in existence. Kalaripayattu includes strikes, kicks, grappling, preset forms, weaponry and healing methods. 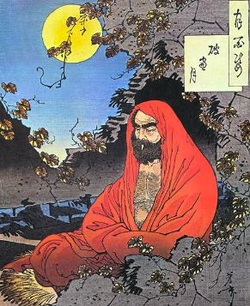 Taishi   BOHIDHARMA   Daruma (470-543 AD) A Monk (From India) and suposedly the Founder of  Zen Buddhism
Some Chinese accounts describe Bodhidharma as being disturbed by the poor
physical shape of the Shaolin monks,after
which he instructed them in techniques to maintain their physical condition as
well as teaching meditation.He is
said to have taught a series of external exercises called the Eighteen
Arhat Hands(Shi-ba Lohan Shou), and
an internal practice called the Sinew Metamorphosis Classic.In
addition, after his departure from the temple, two manuscripts by Bodhidharma
were said to be discovered inside the temple: the Yijin Jing( "Muscle/Tendon Change
Classic") and the Xi Sui Jing. Copies and translations of the Yi Jin Jing survive to the modern day. The Xi Sui
Jing has been lost

Priest Dong Cheng of QianZhai, was famous for his Shi San Shi Rou Shou (1500's)
and was taught Shaolin Quan from two students of Bai Yufeng

(1588-1662AD)
According to accepted theory, he is widely considered to be the originator of
the internal martial art of Xingyiquan. 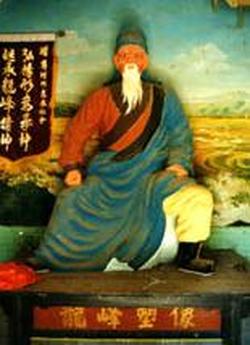 Sokon (Bushi) Matsumura (1796-1893) considered the Forefather of Shorin Ryu karate; he was the chief martial arts instructor and bodyguard for the Okinawan King 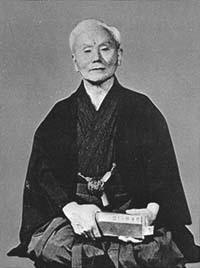 1. Master Funakoshi Gichin (1868-1957) born on Okinawa he is the founder and considered **Father of modern day Shotokan Karate** famous for making popular use of the the kanji of China hand to **Kara te do 'empty hand way** ' He also was the first to PUBLICALLY give an Official karate demonstration to the Japanese people. He was the student of Azato and Itosu and their teacher Matsumura. He blended both Shuri-te and Naha-te into a practice he called Kara-Te-Do. Shotokan was named by Funakoshi's students after his pen name of poetry meaning **Shoto (wavy pines) Kan ( place of )** where they would train. **Kanku Dai** was Master Funakoshi's favarite kata to perform.